The name Xhariep is derived from the San words for ‘red water’. Gariep Dam is situated in the centre of South Africa, roughly 700km from Johannesburg and Cape Town and 500km from Port Elizabeth and East London. Bloemfontein, capital of the free State is only a 2-hour drive north. The town is on both main roads between these centres, the N1 and R58. The Gariep Dam is the largest inland water mass, in South Africa – covering 360 km2 – making it a great water sports location.

Lake Gariep is in the Karoo Heartland, close to the historical towns of Bethulie, Venterstad, Colesburg, Oviston and Aliwal North. The Karoo is an austere land of flat-topped ironstone koppies, stunted vegetation and whirlwinds. It is a vast land of thorn, succulents, aloes and saltbush. The Hottentots called it ‘the place of great dryness’.

Tourism plays an important role in the area. Gariep is host to a multitude of national and international sporting events as it boasts a fresh water mass of over 360km2. The inland yachting, fly-fishing and angling are second to none, regular anglers catch yellow fish, tilapia and mudfish. Boer War sites are numerous and can be toured along with the Lake Gariep Route, which circumnavigates the dam, taking in Bethulie, Venterstad and Oviston.

Top attractions in the area include; 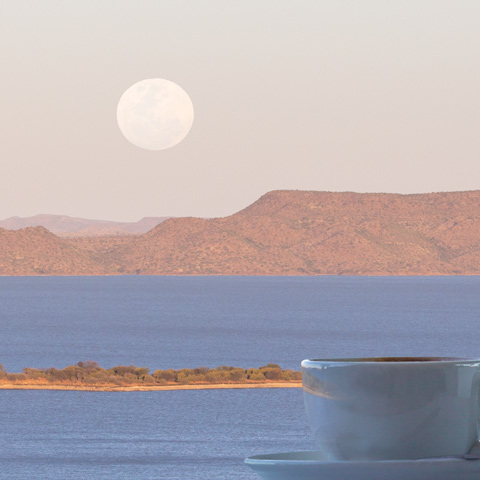 Have your wedding at de Stijl Gariep Hotel with the facilities to meet your needs.

Plan your conference or function at de Stijl Gariep Hotel.

Visit de Stijl Gariep Hotel for quality accommodation at Gariep Dam only 5km from the N1.